Lire cet article en français
Everyone in France (and outside) now has to rethink its political affiliation in three dimensions. 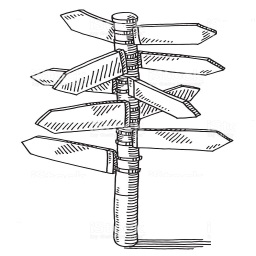 After the victory of Emmanuel Macron, and the constant, tiring tension that came along, I feel the need to talk a little about French Politics.

Indeed, after listening to the mumblings “from the left” arguing that he is the evil servant of big corporations and banks,  “from the right” that he is an evil left-wing, family destructing, void of beliefs politician, and finally the screams of both sides (for once agreeing on something) angering  about the pretended lack of representativeness of his election, I do feel the need to square things up a little about French politics and by extension many others democracies politics.

So here it is in short :

Can everyone stop, one and for all, talking about “left” and “right” in politics. This has absolutely no meaning.

I insist, none. This a very silly simplification of the political spectrum that only roots on the simple physical layout of most of physical representative chambers. On the left of the chambers sit “left-wing” people and on the right… well you get me. None of us can actually fell adequately represented in his subtle political sensibility through this. Don’t you think ?

That is because there is actually not two but three main political ideologies, and it is time for everyone, especially the French, to realize this before claiming with passion that one is from “the left” or from “the right”. Politics are not a linear science, it has three dimensions, dimensions that do not oppose on everything, and that might even agree on some issues.

Those three ideologies each rely on their own core value, value they consider as the very  needed center of the search of human greater good. Little reminder :

This allows us to understand that there is no fundamental disagreement between those three ideologies of political action as long as they all participate in a moderate way to the debate. No right or left. Only three visions on the required ways to reach the same goal: common interest. And those three might be right or wrong, together or separately, it all depends on which issue is addressed.

But we can anyhow add an other “dimension” which is what we could call “moderation level”. Whatever the mix of his/her political sensibilities, anyone can exerts various level of listening and open-mindedness.

In order to clarify this let’s draw a little chart, void as for now, and allowing us to place individuals and political parties. Careful, I did deliberately put socialists on the right and conservatives in the middle to shuffle a little the usual vision. The three axis allow us to measure the level of moderation / extremism according to the three ideologies. And I invite you to try to locate yourself right now. 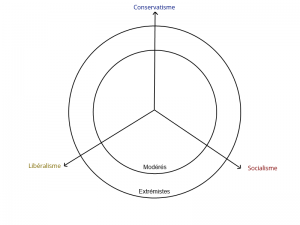 To get a little further, and understand the usefulness of this representation of the political spectrum, let’s now focus on the French example and locate French political parties. Here is what it would lead to : 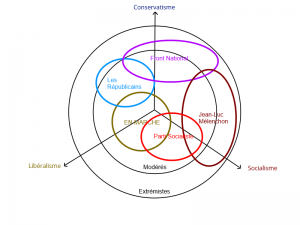 This representation is of course subject to numerous comments, modifications and adjustments but you understand the basic principle. You can specifically identify overlappings. They are the very source of party switch, betrayals and, of course bipartisanship.