Global warming is frightening, and hope is thin to contain it. So maybe we should start not only fighting it, but also preparing for it. 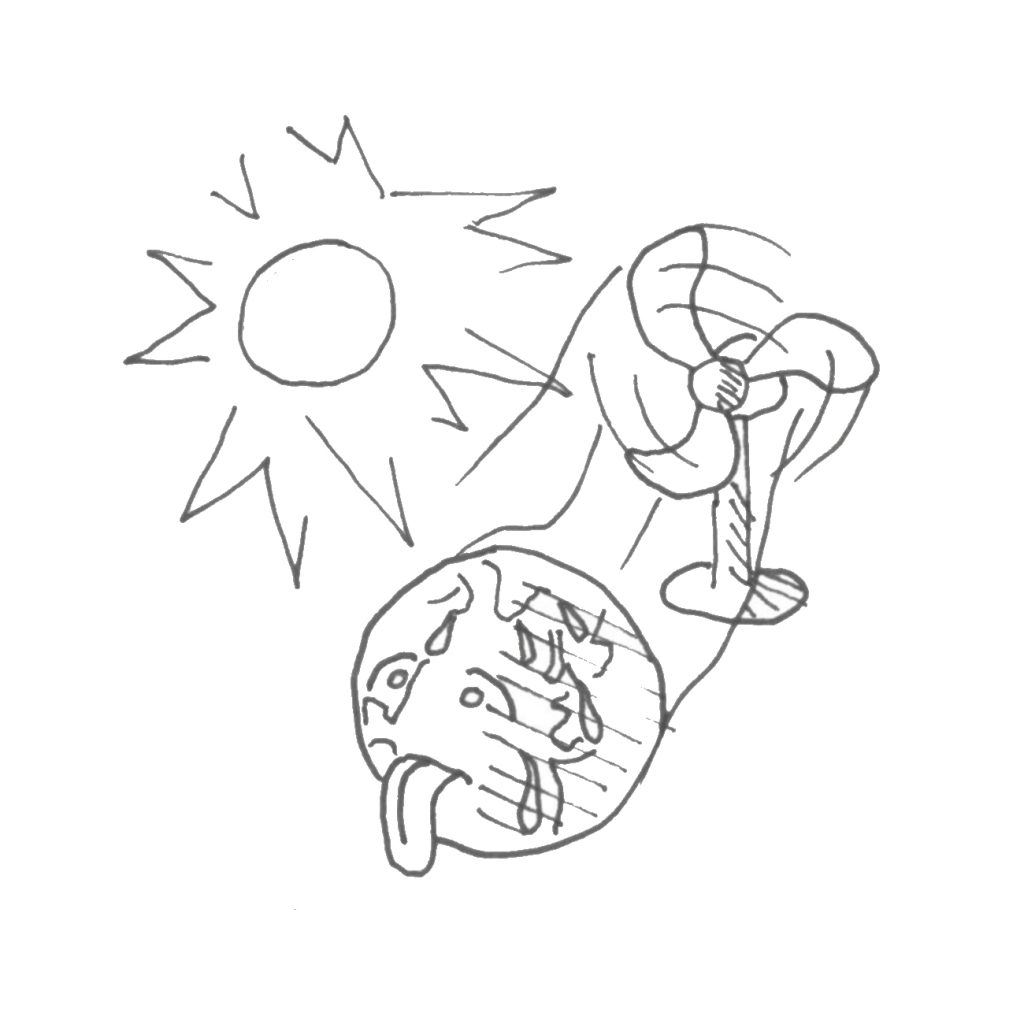 In my last, and more obscure, post about data-mining bias ( that you should of course read, see here ) I illustrated my argument with the example of extreme weather news reports. To sum it up, my point was that while the increasing regularity of extreme heat/frost waves is probably a consequence of global warming, one separate occurrence was absolutely not sufficient to prove anything about it.

In the meantime however, summer passed in the north hemisphere, and it was hot. Damn hot all around. And while still not proving anything “by itself”, it did make me think about global warming. And I am sure you did too.

Global warming is here. No doubt. What was once upon a time a scientific theory became a few decades ago a scientific and political issue. Now it is starting to turn into a scary and material reality for everyone. And it is probably just the beginning.

But here is the problem.

What can I do? I really really want to do something but I feel overwhelmed by it, so what can I really do ?

Because I feel insignificant, helpless in the fight.

Global warming has now been predicted and observed for more than 100 years, and no political consensus strong enough to restrain it have been found. The very honorable, albeit modest, agreement of COP21 was blown to pieces by Donald Trump and its supporters. It might be back, I sure hope so, but for now there is no other deal in sight.

Even if we could, finally, and I would actively vote for the people sponsoring it, agree on global emission reductions that countries are willing to uphold, it probably would not allow us to stop the warming, but merely to slow it down, not even speaking of reducing it back to “normal”.

In fact we have no idea how to significantly reduce the carbon dioxide concentration already in the atmosphere. And on top of this, more heat also means, among many other vicious side effects, more wildfires (which do release significant amount of CO²) and higher need for AC which means higher power production, and thus CO² emission in countries where the energy mix is highly carbonated. So global warming might actually be self-sustaining. Depressing.

Moreover, when I think about what is blocking the way for a deal, I realize that I am biased in the matter. I am rich : I have food, water, medical care and a roof upon my head. And I admit that until everyone has the same, there will probably be no consensus. Not going to happen soon, no. People that don’t have proper water or food don’t really care about global warming, they have more dire concerns, and I think this is perfectly understandable.

We are telling them : “Careful because we are leaving our children a world that will be so much harder to live in !”

They are answering : “OK but my children might not have enough money to buy food, so I will take care of that first right ?”.

Finally, when I look at figures, I can sincerely doubt my modest participation to be more than cosmetic. Buying fuel efficient cars, riding bikes, using mass transportation, limiting AC during summer or heating during winter, consuming less and  locally produced goods… whatever I was told to be useful, seems a bit futile when you realize that every Chinese that is born today will “emit” around 8 tons a year, and every newborn American will “emit” around 16 tons a year of CO², while my reasonable effort might, I guess, only save 1 or 2 tons a year max from the approximate 5-6 tons a year I emit as a French.

To sum it up : what is the point of trying to limit my own emissions, and hope for a solution, when a lot of people don’t care, when the phenomenon might not be reversible and when world population is still growing by more than 80 million people a year ?

That is the point where we can seriously think :

But I keep hope don’t worry !

First, I keep in mind that global warming, while undoubtedly scary, is the consequence of an economic development that has been incredibly positive and continues to be.

Since the beginning of the 20th century, when we started to burn more and more carbon fuel, mankind’s overall condition has drastically improved.

For instance, misery has widely regressed, with the share of mankind living in poverty (less than $2 a day) plummeting from 80% to under 20% today. The share of world population which is “undernourished” fell to around 10% as it was above 20% in the early 90’s and probably a lot higher at the start of the century. Illiteracy in the world fell from around 80% in 1900 to 15% today. Finally, life expectancy at birth rose from around 50 years in 1960 to more than 70 years today. Not bad…

Don’t we forget that. The life of a huge part of mankind has massively improved. And global warming is sadly the steep price to pay for it. That does not mean that we should not address it, of course not, but we should remember that we can still can be proud of what mankind accomplished. My point is : there is no shame in what happened.

Second reason to keep hope: global warming is “relatively” slow. Well it is blazing fast if we compare it to the planet’s life span, but only reasonably fast at our little human level. We must react strongly, we will talk about how, but we do not need to panic. The example of the potential rise of sea level is meaningful in that matter. The GIEC worst case scenario now predicts an average rise of about 1 meter by 2100. While this is not little, and might have dramatic effects both on costal erosion and floodings, we still have some time to prepare for it if we start right now. Serious, not desperate.

And we can especially keep hope in our ability to adapt to it because I have faith in human creativity and research. In all fields related to global warming, people are crafting and developing. They are creating cleaner ways to produce energy, more fuel-efficient or carbon-free engines, meat substitutes, numerous construction improvements, manufacturing processes which capture CO² instead of emitting it… Smart people are right now reacting to the problem and crafting solutions.

Finally, I think we must admit that it might be possible for global warming to have also non-negative effects, even positive one. The thing is, I only hear about global warming as a disaster, with journalists focusing on the catastrophic effects of it. But is there really only downside to it ? I think not and we should be honest about it.

Think about it this way :

Would the world had been 3°C degrees hotter for centuries, and mankind had get used to it, and then it started to cool down quickly, do you think that all journalists would cheers in happiness ? No of course, they would flood you with disastrous forecasts of  famines due to lower food production, increased number of deaths during winters… well pretty much the same.

I don’t mean that it is fake, it is not. I do not mean that we should not care, we really really should. But I do think that only focusing on the negative effects of global warming is a very conservative, even reactionary ( “ahh those good old days when the atmosphere was cooler…” ) way to react to it. It is a fear of change and not a fear of the effects of change.

So what can we do about it?

First, and foremost, we should stop panicking about it. This is real, no doubt. It will affect the life of millions of people, no doubt. We must be constantly aware of it and continue our efforts to understand and control it. But we should stop listening to end-of-the-world preachers and stay rational. No problem has been solved by whining about it. Scientists are to be listened an the subject and serious solutions are only going to be found if we accept the fact that this is happening, that we are probably never going back to the “good old days”, and if we stay positive and constructive about it.

The real question is not “How can we stop this, this is too scary ?” but “How best can we limit it and deal with it now that we probably cannot roll it back, at least entirely ?”

With this in mind, we can continue to negotiate an agreement on a rational strategy to restrain the warming or at least to contain it to a predictable level, the negative effects of which could be addressed and the potential positive ones used to our profit.

Those negotiations should not only focus on emission reductions per capita, but also on population growth. For full disclosure, my wife and I are expecting our 4th children, so I must recognize that I am clearly faulty on this. My home state, France, is indeed helping me a lot in this endeavor, financially and morally. States naturally promote population growth because it ultimately means more power through economic weight, cultural expansion or even military might. But our planet is starting to show clear signs of overpopulation, and global warming is one of them, so agreeing on this is pretty important indeed.

To oversimplify it for the sake of explaining myself, developed countries like the US, were demographic transition is done but emissions par capita are very high, could agree to improve their emissions efficiency, in exchange from developing countries with high population growth but in dire need for economic growth to accelerate their demographic transition, while committing to softer emissions per capita reductions.

We should also of course continue to support research on any subject related to this, with a clear focus on non-carbon related energy sources, and a complete open mindedness about it. When I talk about open-mindedness I talk about renewable sources that are not profitable enough now, or nuclear fusion that is not working right now and might never be. Non-carbon power production is with population moderation one of the two pillars a serious global warming strategy will be built upon. We must stop being political about it and start being progressive. And yes this means giving money trough taxes or investments that we might never get back.

Finally, and this is really difficult, we must start to talk seriously about the “what if ?” consequences of the warming. We must start preparing for the harsh consequences, as for the potential opportunities. In short we must prepare to adapt, because, want it or not, global warming is happening, and we will probably not be able to avoid all of its the consequences. This absolutely does not mean that we should quit on containing it, but we have to be realistic, and this means stop focusing only on emission reductions, but also working hard on adaptation solutions.

Among many other things : costal cities should continue to monitor costal erosion/flooding and starting financing a plan to adapt to it, countries should plan for higher natural disaster relief funding and administration, larger wildfire fighting force. Water supply is a major concern and expanding it should be a top priority right now. Agriculture should prepare for the shift in relative yields that will probably happen…

As you can read, all of this is about preparation, which means financing, which means money that we must distract from our everyday well-being. So yes, I do believe that we are able to react to it, by containing it and adapting to its consequence, but there is no way out of this hard truth :

One way or the other, it will cost us. But we can and will overcome it.

One thought on “Global warming. What can we really do about it ?”