An short example is worth more than a long lecture. Here is a real life example of what an investor can really expect from private equity, and why it does matter. 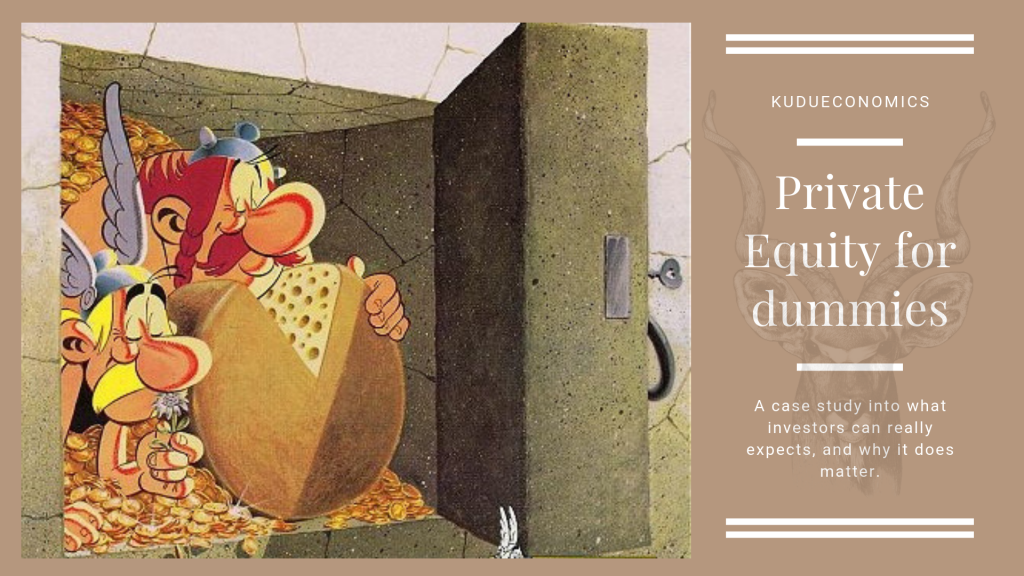 This, is a hot topic. Indeed was I recently contacted multiple times by clients who were “proposed” private equity investments by their private bankers.

They were all promised highly attractive returns ( “Internal Rate of Return” ) and were drawn to it. It was fun, sexy investing. They just wanted confirmation, validation, they were going to do it.

But still… they all noticed the same diffuse smoke in the air, forming a hazy screen of complex figures and arguments, and they could not find its source. Something was not right and they did not know what.

They all received the same advice from me :

I want to explain why. But I will try do it the less boring way I can, which is still far from being fun, I will use a real world example.

So here a real world case of a private equity fund. And here is why it is “not as good as it looks like”, and why anyone interested in finance should be aware of this.

You will notice that I anonymized this example entirely. Why ? Because I do not want anyone reading this to think that this is an exception. It is not. What I  am going to present is one case, among many others. It is real but it is not isolated. Far from it.

I will use real data from a French private equity fund that was launched in 2014 and is supposed to last until 2024 ( 8 years + 2 possible 1-year extensions which will very probably be used ).

We will call this fund Astérix ( for many logical reasons the main one being it allows me to use a nice illustration and it is overly French ).

The shining starting figure : the syren calls of IRReturn

This is the bait. This is the one and only real selling point. AT LEAST 10% a year. “Woohhh this is sweeeeeet !”. No publicly traded asset class could ever promise you that. Astérix, like many other private equity funds, is marketed with those very attracting potential returns.

So this is what the private banker actually “promised” on Astérix. Without telling it (but disclosing it in small footnotes), he was actually referring to the Gross IRR which is the return the individual investments inside the fund have, before any kind of fees.

In geeky finance it is also called “money-weighted return”

The problem is. The gross IRReturn he was talking about is NOT what investors get, not at all.

In fact, as Preston MacSwain very adequately explained it in this excellent post, gross IRR is actually “IRRelevant”  to measuring the performance of private equity investments, and should not be used, especially as a marketing argument.

Here is what investors in Astérix did get :

Going down with the fees

Here lies the problem. The main problem. Fees on Astérix are sky-high, very well hidden and massively weighting down the final real money return for the investor.

It is true that private equity as individual investments *can* earn higher returns than the common public stock market (it can also lose a lot more, it is just riskier). And those Gross IRRs can indeed raise to double digits. But, and even when the underlying investments succeed in achieving those returns, fees separating them from what I would call Investor’s Internal Rate of Return is massive.

The management fees. Not as NOT high as they say.

The fund’s management fees on Astérix are computed this way :

First, even if this was representative, this would still be high. Don’t ever believe that 1%+ of your capital a year is “low fees”, it is not. IF all capital had been called at inception (which was not) this would still represent a significant prize of 17,75% percent during the entire fund’s life ( without adding any kind of compounding effect that would add up).

Second and this is really important : those fees are computed on the PLEDGED CAPITAL, not on paid-in capital.

In private equity, investors pledge an amount at the fund’s inception (like $500k ) but do not pay it right away. This is the pledged capital. It is the maximum amount the manager can ask later for investing during the “investing period” which usually lasts for about 4 years.

The money that is really paid by the investor, when actual investments in the fund are made, is called the “paid-in capital” or “called capital”. It is the real money investment he is making.

Which means that if the fund progressively invests 100% of its engaged capital in the first five years (20% a year for example) the actual management fees will actually be a lot higher than the official rates.

This means that the actual management fees rate from the investor point of view was around (and rounded down !):

Even if the funds investments earned a 10% gross return a year, the investor is already down to about 7%. And that is just the beginning folks !

Indeed, in Astérix, they add up an additional 0.2% fee a year for the bank distributing the fund and 0.12% of undisclosed “administrative costs”… all on engaged capital of course.

Therefore, and I will spare you the computation (which is quite straightforward actually), all those fat yearly fees adds up to an uncompounded amount of around 28% of the investor’s paid-in money on the entire lifespan of the fund (10 years). Ouch.

The carry, rewarding the performance the investor is NOT earning

Astérix, like every private equity fund, rewards manager’s performance in the form of a “carried interest” mechanism. Which means that if the gross IRReturn is computed (by the manager…) over 6% (fund’s “hurdle rate”) then the company gets 15% of all upside (“carry” rate).

This means that they computed performance fees on a performance that Astérix‘s investor will never actually earn. And 15% of something that you will never have is indeed quite expensive.

Pilling up the fees one more time

And this is not over, because Astérix has one more twist to get a little more.

At the fund inception 0,8% of… engaged capital (you guessed it) was taken from the fund to pay for various costs that are also undisclosed.

0,8% on engaged capital at the very beginning of a fund that is “supposed” to earn 10% a year and invests slowly makes quite a difference after 10 years.

But the overall computations are hard. And we now need to compute a overview of the results of Astérix. How can we do that ?

So what is left ?

Not much I am afraid. But all of those fees figures do not add up, and we have to get back to something more fundamental, basic. And there is only one thing in finance that always keep meaning, that you should always search in the darkness of complexity to guide you back to understanding :

How much would Astérix‘s investors have now on the $1 investment they made at the very beginning ?

So here is the history of cash payments to and from the fund viewed from the investor’s side : 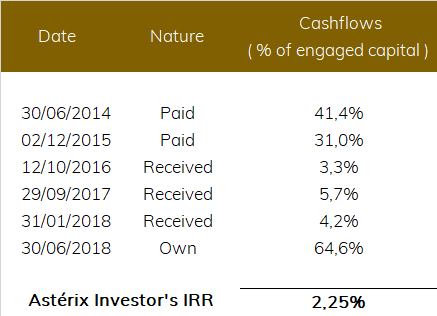 Yes, after all those fees, the investor has so far earned a meager +2,25% a year on the capital he paid-in (this is including the ongoing investments valuations).

As a basis of comparison, meanwhile, would Astérix’s investor had invested in a simple all country equity ETF ( MSCI ACWI ) he would have owned… $1.51 !! A total return on the exact same period of +51%. A lot more return with a lot less risk and a lot more liquidity. It was a very good period for investing in equity, no doubt, but not in Astérix.

Why does it matter ?

This is a legitimate question. After all I might be screaming and kicking about rich people been used by other rich people, like crooked Robin Hood taking from the rich and keeping it for themselves.

The minimum investment in Astérix was indeed 250k€. Not that many people can actually risk that much money on a single investment. Which means the standard individuals investing in it were probably millionaires.

You might therefore think rightfully “Who cares ! I won’t  cry for them, they should be more careful“. And you would be somehow right.

But there is actually 2 problems here :

First there is not only big investors in this. Indeed a large chunk of those funds are sold to “institutional investors” which means pension funds, which means medium to small retirees. The poor returns of those overly priced funds participate in the underfunding of those pensions plans, dramatically lowering the potential future pensions paid to average retirees.

So no, this is not only big fat capitalists with top hats and white ties that are suffering from this. A lot of common people do, without knowing it.

The second problem is all about the “promise” and its deception. Finance already has a despicable image in the general public. It is a much needed economic activity, which continues been seen as a very effective cash machine benefiting only a limited happy few.

When a banker or fund manager, whose clients suppose he is working in their best interest, promote a fund with a “promised” 10% rate of return (omitting to precise “gross” return) and that the client actually only receives 2,25%, like in Astérix, this is a form of lie called misrepresentation. It undermines not only the confidence of the clients and public in their banker, but also in asset management industry, and in finance as a whole. And it should stop.

Investing is like a coin flip. On tails you lose, on heads I win.

2 thoughts on “Private Equity for dummies – A case study”