Trump’s popularity is still surprisingly high. How can we explain it, and what can it teach us about populism ? 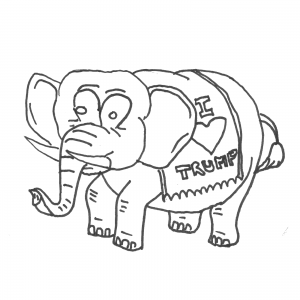 Until very recently I was stunned. I just wasn’t getting it. It was such a huge mystery to me. How, how on earth could a great part of republican Americans still like Trump ? This is how I ended up thinking about it and trying to understand.

“He is a disaster and they will get it, right ?”

This is pretty much what I was thinking. He  might be the worst individual that has ever been elected as President of the United States. I really don’t know all of them to be able to compare, let’s be honest, but still. I try to stay positive, I really do, but every time I find something to go his way he immediately gives me another reason to face-palm myself in despair.

So logically they should just get it, right ? His popularity should have dropped so deep now that he should stand on the edge of a very natural impeachment. I just have to check it and it should be a question of minutes now. Okay so let’s get a glance at the polls just to check that… no problem.

He still has near 42 % of the US voters approving him ? That much ? And he actually gained approval lately ? After a year long slow decline down to 38% he actually made it back to 42 % ?

Really ? Are you kidding me polls ? This MUST be an error.

We must find another source, and here is a very good one:

Well no. It is not. It is accurate. Up to 85% of republicans do approve his performance…

Despite all he did, despite all he said, despite all he is, he is still polling relatively high, and incredibly high among republicans. Well he is still one of the worst performing president according to corresponding time-in-office polls, don’t get me wrong, but… he is is still approved by 42 % of Americans and 85% of republicans.  Of course those 42% and 85% are pretty much the same people, but this is disturbing, even mind-puzzling for my skewed European mind. Explanations like “they are fools”, “they are mad”, “they just don’t get it” won’t cut it this time.

We have to go deeper.

I am French and I despise him. My primal opinion of him is that he is a walking disaster for the US and the world at large. But I think I finally got a glance at an explanation. Here it is :

They are not liking him. Not really. They are disliking me.

Well not me of course, I am French so Trump supporters pretty much don’t care about me at all. I am certainly not that egocentric to think so.

But they do despise American  people “like” me. To clarify my thoughts : they strongly dislike urban, kind of liberal, not especially religious and talking-way-too-much-on-social-networks people. They fell endangered in their way of life, by those people.

And that is it. They dislike other people, different people. This is all about the people. About partisanship, about backing those that you feel share your way of life, who are similar to you, who are on your side. They might call them liberals or democrats it does not really matter, they are just “the other side”.

A great part of them don’t really like Trump, but they know that those pesky liberals abhor him, and just cannot stop whining about it all day long on facebook or twitter, so he must be doing something right. The more democrats hate Trump the more they are inclined to back him.

They are not vindictive, I never said that, but they are very different, so different that it is hard to understand them because we don’t get what is important to them.

As a reminder let’s sum up who the Trump supporters are :

This does not mean that they are racists, rednecks, zealots, ignorant, or even lazy. No, no at all. They are normal people with families, jobs, homes, diversity… It is just that they feel different because they live differently. Of course there are some crazy lunatics out there in those 42%, but they are a minority even in the GOP. But they are so ridiculously extremist that medias cannot help to push them forward to scare you. Like in this interview. Be careful to that.

Still, the moderate majority (GOP moderate that is relative) doesn’t have much in common with the usual democrat/liberal people and they might fear that they are somehow losing the economic game. When you are unemployed, with no tech skills and you see all the jobs vanish to be replaced by developers, digital marketing or designers jobs, you are naturally inclined to think that somehow politics are not going your way, whatever the winning side tells you.

It is therefore completely understandable for them to quietly  by firmly resent people who are probably urban, with higher paying jobs, and with more adapted skills to the new economy,  and who are snubbing them on their facebook wall. The very people who are trashing Trump and its supporters all day long on social networks and that always look down on them, quite literally sometime when they use the expression “fly-over states”.

And we get back to Trump. They know that you hate him, you just cannot stop telling it all around. The thing is they probably don’t really like him either but they might want to send you a message like this : “I don’t like you, I don’t like you snubbing me all the time, despising my way of life, and this is how I express it to you. The guy is a loser. We know it, we are not bad people, we are not stupid, but this is a warning call. Do something so that we can trust you again so that we can stop this non sense”.

In fact it is even possible for them to think unconsciously : “I am kind of losing the economic game here, and they are kind of wining it. So whatever they say is good, is probably not so good for me”. The materialization of the classic :

“The enemy of my enemy, is my friend”.

And this is true everywhere, so what can be done ?

So let’s sum it up to the gist of it : they don’t like the people, you who hate Trump.

And this is not only about Trump. This is the same problem with all populist waves around the world. At least two examples out of the US should be noticed : Brexit and French Front National election results.

Let’s focus on France with Marine Le Pen. Her supporters don’t really like her. She is not actually popular as a person. Her younger niece is actually more popular than her. She managed to slowly build a reassuring and somehow barely moderate image, but the popularity of her party was really brewed on the same resentment I described : good people with a rural, traditional way of life felt endangered by the various changes happening in their life, be it technology, or immigration.

So everything boils down to one thing : they don’t like us because we are different and they don’t want us to tell them what to think.

But we need to be honest here : we don’t like them either. This is going both ways don’t we dare forget that. This is both groups fault, not only this other’s. And waiting for the other side to change its mind while mocking them, insulting them and hoping that they will just say “you are right” is not really clever. So we need to change that.

And the only way to do it is to understand that the various issues we disagree on are really the emanation of a deeper problem which is : we don’t like each other and we just want to be right.

We don’t like the people, the issues are just an expression of it.

Think about it as couple therapy. Couple arguing all the time are often focusing on issues like “you never clean”, “you go out to often with your friends”, “this is not how I want to raise my children”, “you spend too much”. But what they really say is “I don’t love you anymore, and I am not sure I want to live with you”.

We focus on the issues but we forget that we cannot solve them, where compromise is inevitable, unless we trust each other.

So what can we do to try to gain back the trust. What can we unilaterally do in order to improve the situation ? A few ideas :

Okay he might not be THAT bad after all.

2 thoughts on “How can they possibly still like Trump ?”