The asset management lobby just won one more battle in France. The transfer of life insurances between insurers still won’t happen… for now. 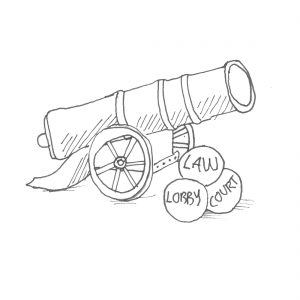 You probably missed it completely, but a few days ago a battle of the highest importance for French investors and the French economy took place. It was short, it was brutal.

I do know what you think now: “Wwoooo… This post is going to be so boring…“

Think again ! On the contrary, it is of upmost importance for French and worldwide investors to read this as a reminder of what is currently at stake and why we fight !

Yes because behind what may seem to you a totally forbidding, technical and “nerdy” detail for specialist of finance or public finances there is a major problem of the French savings system that affects all investors directly. Seriously.

For non French people reading this, French “Life insurance” plans is an investing vehicle which could somehow be compared to the US IRA. It is a capitalization envelope you can in theory get out whenever you want, but at the cost of paying unrealized capital gains. It also has significant inheritance tax breaks attached. It is the biggest investment vehicle is asset size in France.

The problem is that once you’ve opened a life insurance policy, it’s over, you will never be able to transfer it to another insurer without losing the tax benefits attached to it. It’s like that. It is not “transferable”. So if you have patiently invested and capitalized for many years, and just want to continue this way, but want to change because, it is too expensive, or the service is bad, or available investments are too limited (for example very very few insurers allow ETFs to be included!)… well too bad for you, French investor!

Do you believe that the law is made to protect you or to encourage investments? You are so naive…

No, the law has been designed and maintained for the sole purpose of protecting the long-standing partnership between the state and insurers / banks / asset managers at your expense! On the one hand, the French state ensures a stable investment in its debt, and therefore artificially reduced rates, through the “Fonds en euros” parts of those policies which are mainly invested in French Treasury Bonds (More than 70% of invested assets which represent around 50% of French GDP ! No less !). On the other hand insurers and the AM industry as a whole prevent any form of competition in the sector.

And that’s the problem, the big one. Indeed this lack of competition has massive effects on French savings. First, obviously, the fees of are way too high.  The available  investments are extremely limited and reduced to those who pay significant inducements to the insurer, who of course shares them without telling with “financial advisor” or private bank. No index funds, no “clean shares” with negotiated fees, very fee diversification too. European equity, a few other funds and that is it. Finally, the “Fonds Euros” which has a fixed rate, usually has lower rates on older policies… Why ? Why not ! Nobody will go out anyway! ahah!

Basically everyone except the investor wins.

Indeed this poor investor is stuck because he fears to pay taxes on capital gains and lose his capitalization effect (or the inheritance tax breaks) that a plan closing & re-opening would induce. And your bank, your insurer, your advisor, the managers of the mediocre funds that you own inside the plan, and of course the casino holder, the French state, are very happy about it! They say thank you by the way!

Joy among the independent advisors! Hope! Of course there were prudence, as this experienced journalist who expressed her opinion on the outcome of this by a short “lol” on my twitter feed, and betting a lunch with two other optimists that this was not going to pass, despite the good she could think of it.

And she was right.

It took one little day for the insurance lobby and the French state to quickly close this dangerous door. In the Finance Committee, the next day, Finance Minister Bruno Le Maire waved it out brutally, without convincing anyone, or really trying to convince anyone in fact. He did not even try to explain. It just sounded like “NO, and shut up now”.

The insurers and the state won this battle that did not last very long. And I will hold a grudge all my life to Bruno Le Maire for that. And all french should too. You might think that this is purely technical or insignificant. But it is not, it is very very significant indeed, and constitutes a serious defeat of the investor’s, and the French economy.

This reminds me of two other recent defeats for investors in the well-oiled system of financial interests.

The first is still French. This is the attempt to prohibit, within the European Union, the remuneration of financial advisers by the particularly “biased” means of inducements. When an French financial advisor offers a client to invest in a financial product, he almost never charge him for his advice, which is apparently “free” but is actually, and silently, well paid by inducements.

The European initial objective was the total prohibition of such practices.

Well, it did work ! French financial advisors fought and managed to loophole themselves out of it. They can now register as “non independent” (and they all do but will never tell you), inform you in small print footnotes of the fat inducements they are getting, produce each year a small report of follow-up … and that’s all! Business as usual. Sorry for you investors !

The second disappointment is US-based. And is of course the fate of the “fiduciary rule” in the United States. This reform, very needed, was launched under the Obama administration, and proposed the following very sound change: US financial intermediaries selling retirement-related financial products or services were to become “fiduciary”, which meant that they could only legally work in the best interest of their clients.

NOOOOOO ! US financial intermediaries (banks, brokers…) are under absolutely no legal obligation to put the interests of their clients before their own. And here  the worst part:

This “fiduciary rule” was fought by the American financial community, both through political lobbying and in court, which finally ruled against its application last june (2018), through a very insidious ruling of a New Orleans court. Only real independent advisors (RIA) were fighting for it (like Ritholtz Wealth Management, see video at the end of the article). Another lost battle.

We must indeed understand the link between all those battles. What is this “war” I am speaking about ?

Stay well aware of this the next time your financial advisor, banker, or broker tries to sell you something, and never forget this fundamental and very classical principle:

And I highly recommend this video Ritholtz WM put online just after the court ruling and named “it is not over yet”. I stand by it completely.